29.11.2017
On Saturday, 18 November Saint-Michel Theatre welcomed all of IHECS' new graduates along with their parents and professors for a traditional ceremony held in their honour.

This year nearly 800 people attended the graduation ceremony. Among them were 300 former IHECS students who have become alumni.

Jean-François Raskin, IHECS' general director, spoke first to offer encouragement to former students as they embark on their future careers. " Five years is both a short and a long time. Some of you already feel like the time went by too quickly. And the older you get, the more your time in school will seem like a charming episode that went by in a flash. For you it will remain a whiff, an impression, just a few nice, sweet images...."

"The vast majority of you will go into the professional world in the fields of communication broadly defined and journalism, which are undergoing more profound and rapid changes than most. New models, new professions, and new roles are coming to light. We're talking networks, content managers, and digital managers. We're talking content and communications via Snapchat, Instagram, Twitter, and Facebook. Writing in 400 characters, 1,200, or 2000. We're talking data, logic, and receiving conditions; we're talking smart objects, profiles, recommendations; we're talking algorithms and data analysis."

"You are equipped and prepared for these changes. You are ready to seize the opportunities that will no doubt present themselves to you. But you must understand that the world in which you learned certainly will not be the same one that we see on the horizon ten or even five years from now. Be ready to detect these changes."

Beyond your professional career, we especially wish you success in your life. It will be full of ups and downs, sweet and sour moments, pepper and honey, Pétrus and Beaujolais, and everything that makes life interesting. As Jacques Brel said so well, we wish you endless dreams and the fierce desire to achieve some of them, unforgettable encounters and millions of "I love yous."

And if the mood strikes you as you pass by IHECS, open the door that is never really closed and you will always find a smile or an outstretched hand ." 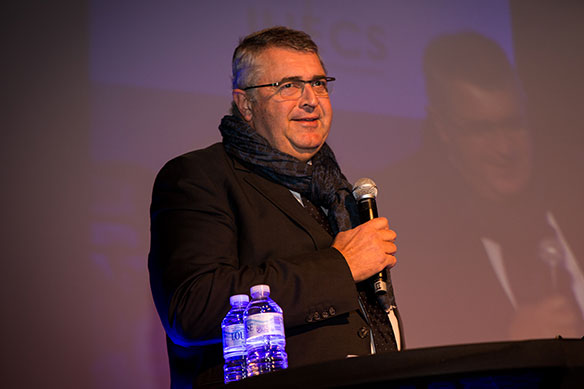 Patrick Ridremont, the colourful comedian who served as master of ceremonies for the occasion, then invited our former IHECS students to come up to the stage in sections. They were handed their diplomas by their section's president and his or her academic assistant.

To bring the ceremony to a close, the IHECS Alumni Association's president, Didier Ackermans, welcomed the new alumni by emphasizing the importance of staying in touch and explaining to them the benefits of joining this network that rests on their participation. Among the short term opportunities available to these future professionals, the project IHECS Preneurs led by IHECS in conjunction with Group One that Maxime Bacq presented to the assembly.

The ceremony, which included speeches, souvenir videos produced by the students, and laughter, closed with a full graduation photo followed by refreshments.

If you missed the event, photos will be available in a few days at ihecs.alumni.be