Recipients of the 2018 Canon Scholarship

18.05.2018
The media dissertation projects that caught the eye of the jury during the third edition of the Canon Scholarship are "Euthanasie - le mot de la fin" ("Euthanasia - the final word") and "Dé/couvertes" ("Un/covered").

As part of the partnership between IHECS and Canon, a competition has been run since 2016 to help students with their media dissertations. The Scholarship is awarded to them in the form of loans of Canon equipment for photo and video shooting or printing. This year, too, four journalism groups presented their projects in the form of a PechaKucha. Two of these were chosen:

In Belgium, euthanasia offers a way to end one's life. Patients in other European countries that have no hope of being cured do not have this opportunity. Crossing borders is then the last resort, along with all the difficulties accompanying it.

Should one have a right to choose one's death?

Throughout the world and since the dawn of time, society, not to mention political or religious authorities, has stipulated how women should dress. Over the years, women have circumvented these obligations and have fought for the right to wear what they like.

Why should it be any different for Muslim women today?

Yet, all over the world, laws are still in place to control how Muslim women dress. An increasing number of women are implementing techniques to bypass these constraints and to have the choice to dress as they wish. For example, in Europe, where society and the authorities are attempting to restrict the wearing of the veil and regulate the way in which Muslim women dress, they claim the right to wear it. Whereas in Iran, where it is obligatory, movements are springing up to assert their right to unveil themselves.

What techniques are these women implementing? How do they circumvent the various constraints? What change do they want to bring about in society? These are the questions that feed our curiosity and to which we want to find answers in our report. So we wish to follow different women on a daily basis in order to answer all these questions, the main one being: how do Muslim women emancipate themselves through fashion and what is the link between fashion and religion? 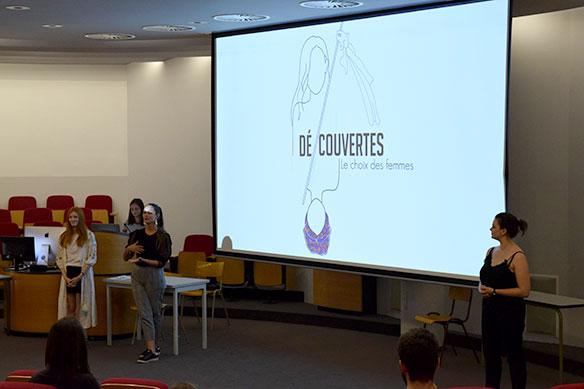