An in-depth look at the progress being made with the coLAB project!

22.10.2018
Following the third international meeting held on 6 and 7 September 2018 in Rome, the coLAB project entered its second phase: the implementation of teaching activities.

Hailing from all walks of life and with solid professional backgrounds, the new non-permanent teaching staff teach various fields such as cultural communication, marketing or journalism within the four partner institutions.

Since 17 September 2018, IHECS has been welcoming various teachers from abroad whose qualifications have made them eligible to participate in this project. These courses, seminars and other teaching activities are being organised until the end of the 2018-2019 academic year. 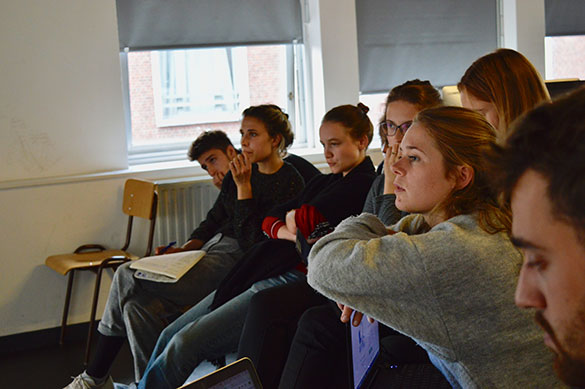 Université Clermont Auvergne (UCA), meanwhile, celebrated the launch of its activities with an evening inauguration on 9 October 2018. It was hosted by the group Soudan Célestins Music, one of whose members, a professor of sociology in his own country, was hired to teach Arab culture together with a UCA professor.

For its part, the London College of Communication allowed its participants to receive specific training in teaching techniques in order to be fully prepared for their future missions.

And finally, LUMSA University is working with two non-profit organisations, centro astalli and Sant'Egidio, to find future candidates who will participate in the coLAB project at the beginning of the second semester.

As a reminder, this project is co-funded by the Council of Europe and the European Union as part of the DISCO - Democratic and Inclusive School Culture in Operation – call for proposals.