02.05.2015
Invited to participate in the international week of the Faculty of Journalism at Lomonosov University, our young travellers contributed to an edition of "Journalist", an electronic publication dedicated this year to Russian new media.

There were nearly 20 students who seized the opportunity offered by Diana Kulchitskaya, lecturer at Lomonosov Moscow State University during her last visit the Institute for Higher Social Communication Studies (IHECS) in Brussels. Most of them were in the third year of the bachelor programme, but they also included a few Master's students in journalism.

Entitled "Russian Media and Journalism", the international week of the Faculty of Journalism at Lomonosov University was organised from 13 to 17 April. It brought together just under thirty students from various parts of Europe.

No doubt benefiting from the opportunity of discovering the large and small pleasures of Russian culture, our young travellers nevertheless certainly got their hands dirty. The principle task? Putting out a magazine dedicated to media and the practice of journalism in contemporary Russia. 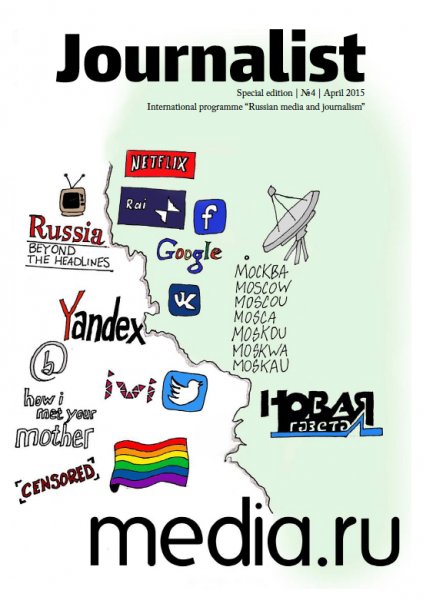 "More personally, I had intended to explore Russian culture, which was totally unknown to me. I have always loved to travel and meet people from distant lands or completely different backgrounds. I also found it very interesting to learn about the codes of media management in an environment totally different from ours (...)

I was not disappointed, as I learned a lot about the culture, politics and philosophy of the Moscow media. During this week in April, we attended just under 10 classes taught in English by faculty lecturers.

We were about 25 students from all the countries in Europe. Bulgaria, Belgium, Austria, Germany, Poland or Italy, each one of them sharing their views or question with the lecturers. (…) In the afternoons, we generally had organised visits to media organisations. We were therefore able to visit two print newsrooms and television channel. "