07.10.2019
At a photojournalism workshop at San Ignacio de Loyola University in Lima, two of our professors, Thierry Maroit and Laurent Poma, were able to observe a unique phenomenon known as "La Garua".

A few weeks ago, IHECS professors Thierry Maroit and Laurent Poma were in Lima as part of a photojournalism workshop for students at San Ignacio de Loyola University. It represented an opportunity for these image hunters to observe a very special phenomenon:

"It was the first time I had such a special experience, where it feels as though it’s about to rain, but it never does rain or it only rains a little, but on the other hand the humidity is fairly high because Lima is right next to the ocean. The ocean has giant waves that give off a permanent mist,". This phenomenon described by IHECS photography professor Laurent Poma is called Garua, the Spanish word for drizzle.

In the city of Lima, which locals themselves refer to as "Lima the grey", this drizzle has the distinction of being almost constant because it is trapped by the Andean Cordillera. A natural phenomenon that unintentionally fits into a certain trend of contemporary photography that consists of trying to erase contrasts. "This is really fun for a contemporary photographer who really seeks out this kind of atmosphere; I also appreciated this lack of contrasts that generates an eerie feeling and lends the ciry an almost mythical dimension".

Thierry Maroit adds that beyond this haze that he has never observed elsewhere, dust emanating from the desert, as well as pollution, help diffuse the light. According to him, if the light does not allow much in the way of contrasts, these are more pronounced in the architecture and the disparate layout of the city. "There are quite a few places that are very colourful, as though the people of Lima wanted to compensate for this fog with colour. One also finds that the buildings have totally different styles that coexist : Bauhaus, Art Deco and half-timbered houses". Laurent Poma was also able to note a very marked contrast between the social classes, an equality also perceptible at the architectural level. 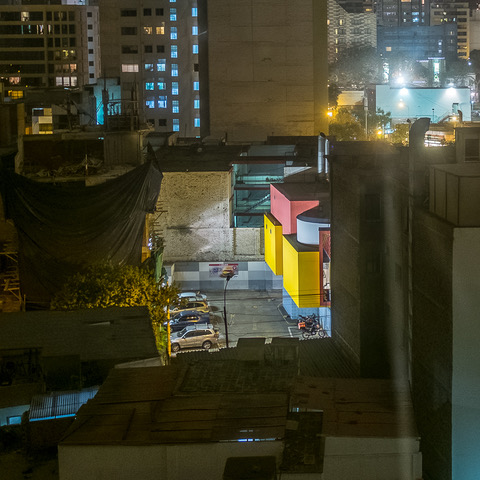 Although this atmosphere has troubled our two teachers, for students of San Ignacio de Loyola University (USIL) who live permanently in Lima, this climate does not really affect the choice of topics they have chosen to address with their photographic report. "Ultimately, we find similarities in the concerns of the students with whom we worked, whether they are from Moscow, Brussels or Lima : the issue of transportation, personal unhappiness, the issue of gender, feminine identity, the relationship to work as a student and student life", underline both our teachers. Laurent Poma adds that the issue of transportation is particularly prevalent among students living in Moscow and Lima, given the size of these two cities.

With regard to the question of how the approach to teaching photography differs between IHECS and the institutions visited, Laurent Poma replies that IHECS "is making a shift away from a method that is without doubt more "classical", i.e. focused on technique. Instead, we are engaged in a dialogue that we set up with the students whom we support in their reflection and in the realisation of their subject." Both teachers also point out that the duration of the workshops differs from one city to another. The Lima workshop was very short, but had the advantage of promoting spontaneity.

At this stage of the project "Being 20 in… ",  what pleases our two trainers is that the workshop attracts other workships organised within the framework of international exchanges. This success is particularly linked to the approach of Renato Meza, who teaches photography at USIL and who encourages students who did not necessarily participate in this workshop to contribute to the Instagram account associated with the project, since their photographic approach is part of the theme "Being 20 in Lima". The account continues to thrive in the absence of our teachers. "My dream is that researchers involve themselves in major cross-cutting issues that could appear through collections of stories", says Thierry Maroit at the end of the interview.

What is certain for now is that Renato Meza will come to Belgium next March to moderate a workshop with students taking our Journalism Master’s programme, supervised by Pauline Beugnies, a former student at IHECS and nowadays a recognised photojournalist. This is a workshop that will further enhance the Instagram account and allow us to discover the world of youth and its darkest and/or most wonderful aspects.

* The productions from students from Lomonosov State University should soon be added to the collection of photographs already published on Instagram.